my name is Mary Stutelberg, and Michael was the youngest of my three sons. He was born on December 2, 1976, and we buried him on his 22nd birthday.
Michael had a very debilitating and fatal illness that left him completely blind and totally deaf until a cochlear implant was successfully implanted. Mitochondria disease claimed his life.
Because of Reece Endeavor, the quality of life that Mike enjoyed during his last few years, under difficult circumstances, was as fulfilling as it could possibly be. The day Mike moved into the Reece house on George Street, he was so proud and so excited to be moving into this own house, becoming somewhat and looking forward to starting a job and earning his way, just like his older brothers were doing (and Mike LOVED his money)! The self-esteem and that he felt that day was just incredible to see. As you can imagine, that was a very proud moment for his family as well – and for that, we are truly grateful to Reece Endeavor.

Living with a Smile

What characteristics did Mike possess, and what did he do that would cause Reece Endeavor to honor Mike’s memory by naming this award after him? Well, I am his Mom, and I could go on for days about what made Mike special, but I did not establish this award – Reece Endeavor did. So why did they give it Mike’s name? Trying to come up with a succinct answer to that question, it dawned on me that it probably comes down to two things – perseverance and a great attitude. I believe that those are the primary traits that Reece Endeavor wishes to recognize with this award – not giving up, staying the course and doing it with a smile on your face.
Recognizing that I “may” be a bit biased – with that said – I still have to tell you that Mike displayed those qualities EVERY DAY!!

Mike had just finished 8th grade at Jefferson when the first stroke left him with no peripheral vision on his right side, and very hard of hearing. That happened in June – in August; Mike went out for the Dow High golf team! In February, a second stroke left Mike blind and even more hearing impaired. Mike still did not give up. He returned to Dow High after spring break, made the honor roll and graduated to a standing ovation in 1995. I will never forget the huge grin on his face when he crossed that stage to accept his diploma. He did not know it, but there was not a dry eye in the gym. His perseverance, positive attitude and sense of humor enabled him to be successful. When we got home that night from his graduation, Mike said to me “Mom, I did not know I was so popular!”

Mike never really viewed himself as being handicapped. It was just something that happened, it was a bad break and an inconvenience, but there was nothing he could do about it, so why be down and why dwell on it??

After high school, Mike persevered for a year in Long Island, NY, at the Helen Keller School for the Deaf and Blind, learning how to live independently. When his training was complete, Mike moved into the Reece Endeavor house on George Street with Rex as his roommate. Mike persevered at three jobs, working a few hours each week at all of them. Watching Mike through all of that, I can tell you that I truly believe that right up to the day he died, Mike felt as fulfilled and as good about himself as anyone of us could hope to feel. And, at the end of the day, isn’t that what we all strive for?

One last thing about attitude as it relates to this award. More often than not, Michael’s concern was more for others than for himself, and I think that people who give of themselves to help others in the community all share that trait. Numerous setbacks, lengthy hospital stays, doctor’s offices, etc. were a large part of the last 8 years of Michael’s life. Every time something happened or his health worsened, Mike never lost hope. He worried about other people and their trials and tribulations. 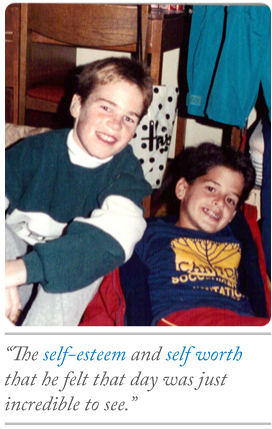